September was a month nobody will forget, sadly as we saw the passing of Her Majesty the Queen. Something that even though it was inevitable at some point, at the same time it seemed she would go on forever. May she rest in peace now. September finally saw the appointment of our new Prime Minister Liz Truss and a much anticipated but very controversial tax cut spending spree including one of the most important announcements for senior finance contractors in years!

I’m sure many of you eagled-eyed people may have already noticed this update has a shiny new look. For those that weren’t aware, September saw Absolute Recruit’s new rebrand including a brand spanking new website. I might be biased but I think it’s pretty damn good.

I’d be interested to know what you all think. Please check it out here – absolute-recruit.com

September has been a busy month once again for the elusive senior finance contractor! This month we’ve seen a trend in clients shelving permanent hires, citing uncertainty ahead and instead opting to hire an interim until the picture looks clearer next year.

Another couple of clients had been struggling to hire candidates with good US finance knowledge. Technical knowledge specifically around the US including US GAAP, SOX controls, US sales tax, and payroll had proven a challenge for them, and we were instructed to support their search.

Despite VC investment down and some redundancies in the start-up market, we’ve supported several high-growth tech start-ups continuing with hiring plans. What wins clients over in these roles are candidates that can demonstrate prior experience working in fast-paced ever-changing environments.

Vacancies have dropped by 34,000 from the previous quarter. Data from the ONS shows it’s the largest quarterly fall since 2020. It still shows 1.2m vacancies, but more and more this month have I heard of redundancies and hiring freezes as companies grasp soaring inflation and the market turmoil.

Despite the declining market, for my senior finance contacts, it is interestingly still a very busy time. As we saw in 2020, during covid; companies may be cutting overheads, but finance is a business-critical area. During 2020, many of my finance contacts worked long hours and sacrificed holidays (not that you could go on them, but still) all to guide their companies through the pandemic.

Now we are out of that phase thankfully but as we enter new uncertain times with the cost-of-living crisis and volatile markets, once again senior finance professionals will be sought after with planning, budgeting, and finance leadership skills.

Budget update – The good, the bad, and the ugly

“The good, the bad, and the ugly….Chancellor, Kwasi Kwarteng’s September “Mini budget”. A hotly anticipated budget to aid families during thecost-of-living crisis turned into an unpopular tax cut spending spree. Markets reacted badly, the pound plummeted and the Bank of England stepped in, and the new PM and Chancellor made a U-turn on the not-so-popular 45% tax rate cut. But it wasn’t all doom and gloom with one very important announcement for senior finance contractors! IR35 2017 & 2021 reforms to be repealed?! HOLY MOLY! – more on this later…

But first I will rate the Chancellor’s budget cuts and announcements into the good, the bad, and the ugly.

First, there were some good and very much-needed announcements. So let’s start off with the good. The basic tax rate cut to 19% will be an extra c.£375 for someone earning £50,000 per annum. They also announced (previously) energy bills will be capped at £2500 (based on average use) which will be a saving of c.£1000+ based on the previously planned October increase. Business energy rates are to be subsidised too, which is crucial to keep many businesses afloat during the winter. Corporation tax will also remain at 19%, which is all good news for businesses.

Now on to the bad. Now this one may be controversial, but I’ll explain my views here. I do think first-time buyers need more support getting on to the housing market and I don’t necessarily think raising the FTB threshold is a bad thing.  But largely outside of London, many first-time buyers would be more able to buy a property for under the previous threshold of £300k. I think increasing the rate at which it starts from £125k to £250k is in my opinion, not something they needed to do. Increasing movement and demand in the property sector is only going to further drive-up house prices and make it even harder for first-time buyers to get on the ladder. FTB mortgage rates are increasing to unaffordable amounts, and I just think they could have spent the money better elsewhere.

I know the PM and Chancellor have made a U-turn on the 45% tax rate cut, but I still wanted to mention it as it’s still influenced the market. It proved hugely unpopular and what a monumental mistake. Trickle-down economics has been widely discredited and isn’t a quick fix of support to those who need it the most. The banker’s bonus cap being removed sits in the ugly pile for me. It’s not that I begrudge bankers earning more, far from it as it’ll bring in more revenue from tax; it’s just the poor timing of the announcement that I have taken issue with as many are struggling to pay their bills.

Christmas has come early for contractors! IR35 2017 & 2021 reforms are to be repealed from April 2023. An announcement of such incredible magnitude, it was only fitting to give it its own section. Well done, Chancellor, Bravo! Many of my senior finance contractors will be jumping for joy. The previous IR35 reforms were a complete disaster, with many contractors opting for permanent roles, and with the extra costs and lack of candidates we saw contractor rates soar. Businesses paid more but so did the Government. Initially, the government aimed to claim extra tax through the reforms which they did from the private sector but then spent more on the public sector with rates and salaries increasing.

My predictions for the rest of 2022

This year the demand for senior finance interims across the board has been immense. A clear lack of available talent in the market has seen clients paying well over the odds to secure candidates for interim roles. I see this continuing over the rest of the year and looking further ahead with the IR35 changes can only see the demand for contractors in 2023 to be even greater…BUT hopefully, with the changes, we will see the more available talent on the market.

In uncertain times, with high and ever-changing costs I am predicting a real need for experienced FP&A candidates to support with budgeting and forecasting work. Challenging times lie ahead for many trying to budget costs during soaring inflation.

FBPs are the MVPs

More and more I speak with clients who are looking to streamline archaic or manual processes and implement new systems that can not only produce the numbers but can really get into the data. Finance Business Partners that can demonstrate leading finance transformation projects successfully will be in demand.

During uncertain times, skills are needed and often we look at the technical experience as a skill. But one that is ever crucial is a strong leader. Candidates that can demonstrate navigating a business through covid for example or leading a cost-cutting excise across the business will prove invaluable over the rest of the year.

Looking ahead I think we are entering into an uncertain period and typically that can mean businesses pause on hiring plans and look to make cost cuts. Perhaps this may mean some redundancies, which we’ve already started to see in some areas. I think we will continue to see a gradual decline in vacancies as companies cut costs and freeze non-urgent hiring until the market looks clearer and in a better position. Talks of a recession, the £ falling, and the impact of inflation are all going to impact the recruitment market over these next few months and into next year.

Currently, there are still 60% more vacancies than there were two and half years ago. Many businesses have struggled to hire and attract talent in the aftermath of the pandemic as companies ramped up their hiring plans. It remains very much a candidate-driven market, most candidates are in multiple interview processes, receiving multiple offers. Counteroffers are still happening on almost every candidate we deal with and although we are starting to see the market decline, I don’t think it’s suddenly going to be easier to recruit top senior finance talent overnight.

Finally, before I sign off, I wanted to let you know about a Diversity, Equity, and Inclusion event that were are hosting next month with guest speaker Dan Robertson. Please see the flyer below with all the info, click on the link and register your interest now.

Thank you for taking the time to read our senior finance market update. As always, if you would like any advice on hiring, candidates, salary benchmarking or a general chat about the market or to discuss your next role; you can now book a 30-minute call with me using this link – https://calendly.com/ashley-absolute-recruit/30min 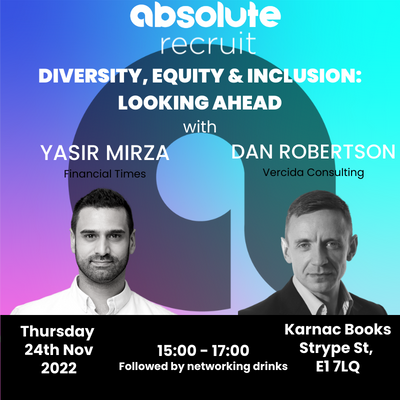 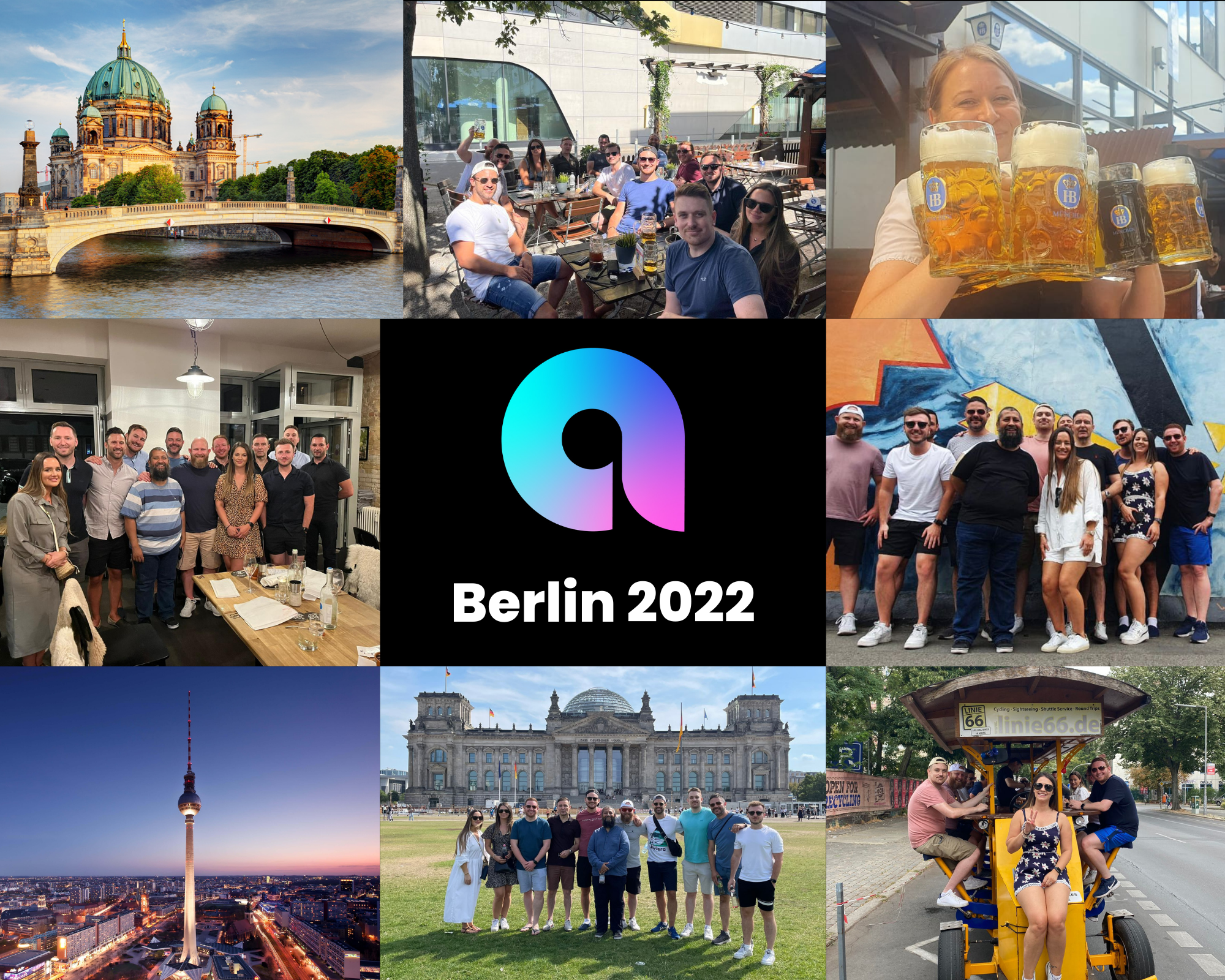